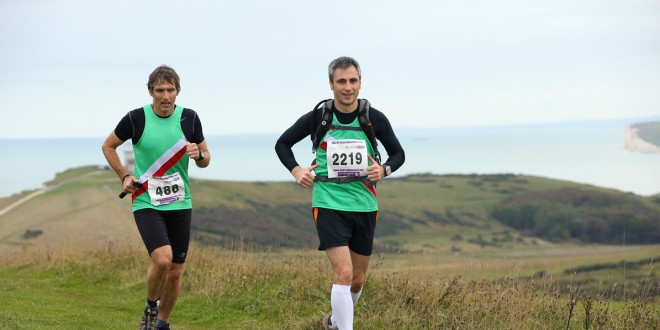 Beachy Head Marathon 2014 was marathon number 8 for me in total and number 6 this year! I don’t know what’s happened but this year I seem to have gone a bit mad with the marathons. Partly due to the influence of my friend Richard who joined the Harriers club last year and has not stopped running since.

The day began at around 6am with porridge and chia seeds. Mark arrived rather early and sat in the car whilst I got ready. We collected Grant and Richard from West Worthing at 7am and we were on our way to sunny Eastbourne. The Beachy Head Marathon organisers don’t post anything out prior to the race, so we needed to arrive a little earlier than you might expect in order to register and collect race numbers.

I used to live very near the foot of Beachy Head, in Meads Village, so I was confident of where I was going. The weather was predicted to be sunny, but it was rather overcast when we arrived. It was already pretty busy but collecting numbers, changing and bag drop was all easy enough. It was only after we started the race that people started to point out that I had my Harriers vest on the wrong way round!

Beachy Head Marathon is growing and growing and there were more than 1600 starters this year. I had decided some time back that I would use this race as a training run for the upcoming Brecon Beacons Ultra. However, Richard decided he was going to race it and foolishly I then decided I would give it a bit of a go too. So my plan was to start with the intention of finishing in 4 hours. However, having felt quite ill after some recent marathons I also decided I would cut back on the use of glucose tablets and general sugar intake during the race. These two decisions had a major impact on what was to follow!

The race starts with a very steep run uphill. Richard went off like a loony, like he always does. I tucked in behind Grant and Mark followed behind. As we got in to the race that’s how things settled and for the first 10 miles Richard forged ahead, Grant and I stuck together and we seemed to be pulling away from Mark. However, just after leaving Alfriston village and following the South Downs Way, we hit Bostal Hill. At this point Grant started to get away from me and I began to feel fatigued. By the half marathon point I was still on track for a four hour finish, but I knew I couldn’t keep up the same pace. What I didn’t know was just how gruelling the second half of the race would be!

In the first half of the run there are one or two points where it is fairly level and it’s possible to run at a decent pace. In the second half it is either up or down and there’s no in between. By 14 miles I could no longer see Grant, and Mark had caught up with me. However, rather than speed on ahead, he stuck with me all the way home. He had so much more energy than I did and was chatting to people and bouncing ahead, then stopping and waiting for me. There are two sets of steps going out of the village of Litlington at around 17 miles and then at 20 miles there is a long climb out of Exceat at the Cuckmere Valley to get up on to the Seven Sisters. Looking at the video, it took around half an hour for us to cover the one mile between 20 and 21. Unfortunately I can’t check my Garmin stats as they are pretty messed up due a GPS problem I had at the outset of the run.

On a positive note, Beachy Head Marathon scenery is absolutely stunning pretty much all the way round the run and from a gastric point of view I felt very good all the way round and after the race. However, this was at the expense of performance. My legs and my brain were so starved of glucose that I was really suffering during the second half. I must have walked more of the last 10k than run, to be honest. At the final checkpoint at Burling Gap, which was 22 miles, I lay on the floor and was closer than I have ever been to calling it a day in a marathon. But, I thought, it is only 4 miles back. So I dragged myself up and Mark pulled me to the end past Belle Tout lighthouse and up on to Beachy Head cliff top. With a mile to go, the mental strength that comes from knowing the end is in sight kicked in, and I was able to put in a good run to the finish line.

We crossed the line together at 4 hours and 55 minutes in 642nd and 643rd places. Grant finished in 4 hours 10 minutes and crazy Richard managed an awesome 3:55. It took a while to recover but, as is always the case, once I’d got a few drinks inside me I felt glad I’d done it and looking back I enjoyed it. Certainly there were points where I wished it was over, but that’s marathon running for you. I think the film I have put together gives a good impression of what it was like. Roll on next year’s Beachy Head Marathon, although we have a few other little runs to do before that! Brecon Beacons 46 mile ultra beckons!