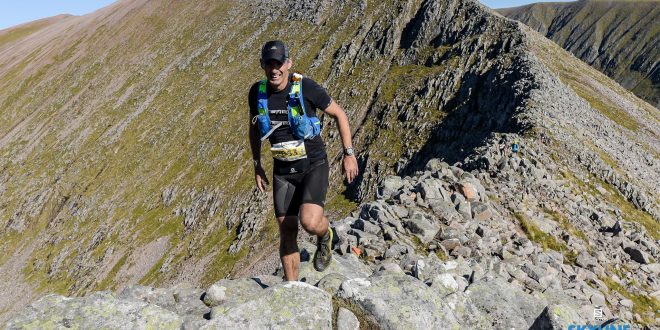 How did I end up running the Ben Nevis Ultra? Well, when Glen Coe Skyline appeared on the race calendar a few years ago I was immediately excited by it. However, the thought of climbing  Curved Ridge also filled me with fear.

I have little to no climbing experience and in order to even be considered for the start line you need to be confident up to grade III scrambling level. I am not , and an email to the organisers confirmed my ineligibility.

The alternative was to enter the Ben Nevis Ultra. It took me a couple of years to finally get my entry in due to other commitments and even this adventure was to be squeezed in between other events.

I flew to Glasgow from Gatwick and hired a car to drive up to the village of Kinlochleven where the race starts. Unfortunately I had booked a hotel which was about an hours drive away from the start line. Don’t ask me why. I have no idea why I thought that would be ok. It really wasn’t.

I arrived in Kinlochleven after a fabulous drive past Lock Lomond through the mountains towards Glen Coe and Fort William. The A82 is long and winding and dangerous, but the views are stunningly beautiful.

Having arrived in the late afternoon, I didn’t want to leave. I had delicious soup in the Ice Factor cafe, which was clearly the hub of all activity, and wandered round the race village.

I had passed my hotel on the way up and it really didn’t look all that inviting. I asked if there were any lodges left on site but there weren’t. I got my kit checked, picked up my race bib and bumped into  running YouTuber John Kynaston in the race village. Then went for a short stroll along the first mile or so of the route before getting in the car and heading back down the A82.

The drive back down was almost worth it. I stopped to watch the sun going down and photograph the view. Why have I never been here before? My room and the hotel was dated and brown and I was glad that I needed to be up and out early.

The sky was clear in the morning. Not a cloud in sight. As such, it was freezing first thing! I am often stuck with races like this. If it’s my first visit to a race, I usually take the camera and film it. But this means I can’t give the race my all. I was about to find out that you cannot dented the Ben Nevis Ultra and not give it your all.

I was also about to be reminded of a lesson that I really should know by now. Research and planning are extremely helpful in getting you successfully to the end of a race.

Far too often, I turn up on the start line of a race with little to no knowledge of what lies ahead. Most of the time I get away with it. Indeed, I enjoy that feeling of not knowing and discovering the race as I go. But there are some races where you can’t be so relaxed or lackadaisical. Especially when you are not as fit as you should be.

Prior to starting the Ben Nevis Ultra, I had had a very mixed race year. I had enjoyed good races at Bluetrail in Tenerife and at the inaugural 1066 100 miler. But I had also DNF’d the Thames Path 100 due to chafing, the North Downs Way 100 due to injury and TDS in Chamonix due to lack of fitness following my injury. I was still not fully fit coming in to this race but I thought nothing of it. I mean it’s only 52km. What could possibly go wrong?

There was a cheesy countdown at the start of our race finishing with the announcer shouting “0ff you go!” rather than a gun or hooter. We passed the assembled crowds and the lone bagpiper and made our way out of the village.

We were immediately into the climbing. On the first hill, short course ultra running specialist Holly Page was standing to the side of the trail, cheering us on.

The course was immediately wet. Initial rocky terrain gave way eventually to sodden grass, mud and bogs. The climbing was steep from the outset and it was slow going. However, I found myself swept along on single track with other runners and I was finding it difficult to keep pace from early on.

The scenery, as you might imagine, was awesome. The sun was golden in the early morning sky and I loved it. There were areas where it felt very remote, even though it probably wasn’t! The terrain kept changing from grassy bog to wet rocky paths and gorse fields. At 10km we were 750m up and rounding the side of the 943m Binnein Beag which is at the eastern end of the Mamores range.

There then followed the most hilariously steep and squelchy downhill. It was so steep and wet you could literally sit on your arse and slide most of the way down! The only reason I didn’t was for fear of hitting my coccyx on a hidden rock. At the bottom of the hill we turned left and ran/walked/squelched for some 4 kilometres following the Water of Nevis until we reached a small band of cheering spectators and marshals indicating a right turn up the hill.

This was the start of the main climb to the summit of Ben Nevis. After a beautiful river crossing it was up, up and up through long grass on an almost non existent path to the next plateau. I was feeling very tired even after only 19km of ‘running’. I put running in inverted commas because it had taken me 4 hours to get this far. That’s 3 miles an hour. I was not fit and it was about now I started to be a little concerned about cut offs and reaching the one and only aid station in time.

Let this be a lesson to anyone thinking of rocking up to a serious race without doing any preparation. I was undertrained and complacent about this 52km race. It’s only 52km. How hard can it possibly be? Well hard enough for someone in my current state of readiness. My fatal error was not identifying beforehand, exactly where the checkpoint was. For some reason, I had thought it was at the summit of Ben Nevis. I expected it to be a simple time check and verification point.

At 20km we turn off the plateau and began the ascent to Carn More Dearg. At 1220m above sea level it is the link to Ben Nevis across the arete. It was very slow going to the summit partly because you simply had to stop and look around you every few minutes. It is arguably the most stunning scenery I have encountered in the whole of the UK.

Eventually I came across two people sitting on top of the tiny Carn Mor Dearg summit who pointed me in the direction of the famous CMD arete. I was already worried about reaching the summit in time before the 2pm cut off and the arete looked incredibly technical and difficult. But, with a few nerves in my stomach I set off. There were plenty of people still behind me so that gave me confidence that I wasn’t at the back of the pack and hopefully I would be ok.

The CMD arete is about 2.5km from the summit of Carn Mor Dearg to the summit of Ben Nevis. It took me an hour and 15 minutes to cover those 2.5 kilometres, during which time I cut my leg badly on a rock, scratched my camera lens on another rock and stood on the very edge of a 400ft drop as I traversed the arete. It was definitely ‘fun’. I actually did love it, despite being pretty scared at times.

Eventually, I clambered over the final few rocks to reach the summit of Ben Nevis, an achievement in itself climbing Britain’s highest mountain by it’s most challenging route. It was also not yet 2pm and I went in search of the checkpoint. The summit of Ben Nevis is a lot flatter and larger than I expected. I eventually found a marshal and expected him to take my number or scan at barcode on my bib. But no. I asked him where the checkpoint was and he told me it was at the bottom of the mountain.

Aaaaaaarrrrgggghhhhhh!!!! I was so annoyed with myself for not checking beforehand. I was so frustrated with myself for being so complacent and lazy. It was 1:15pm. I had 45 minutes to make it to the checkpoint at the trail head some 7 kilometres down at the bottom of the mountain. Doable in theory, but in practise it was never going to happen. I gave it my best shot and passed a ton of runners on the way down, but the terrain didn’t allow for a completely smooth run all the way. I was tired from the climbing and I just couldn’t pull it out of the bag.

2pm came and I was still 2km or so from home. I still ran, hoping beyond hope that for some reason cut off had been extended or that I had got the time wrong. But no. I arrived at the checkpoint, which was a fully fledged aid station, at 2:20pm to find a whole crowd of other runners who had missed the cut off too.

One guy had sprinted from the bridge 50 metres from the checkpoint with spectators telling him to hurry and that he could still make it. But as he got there a marshal stood in his path a refused to let him though. He had missed it by less than 15 seconds. I was gutted to miss it by 20 minutes. What must he have felt like? There was nothing left to do but stop the watch and feel sorry for myself.

The bus back to Kinlochleven was the most depressing sweeper bus I have caught, and I have caught three in my time. I felt more annoyed and disappointed to DNF this race than any other previously. Primarily because it was entirely my own fault for not preparing properly, but also because Scotland and Ben Nevis rarely had such amazing weather. When is the next time I will climb Ben Nevis with completely clear blue skies? I’m guessing never!

“Did you have a good run?”, were the words of the marshal who greeted us off the bus and cut off our trackers. “No, you heartless dick!” Was what I felt like saying!! I moped around the race village for a little while and I would have stayed a little longer and tried to cheer up if I hadn’t had to get back down to Glasgow for my flight home. I had squeezed the Ben Nevis Ultra into the weekend when my primary focus was actually to swim in Lake Serpentine in London the next day to get my London Classics medal.

You get the London Classics medal for completing all three major London sporting events, The London Marathon, The Prudential Ride 100 and the Serpentine 2 mile Swim. Thankfully I made it back to England and completed the 2 mile swim the next day on another gloriously warm and sunny day.

I will most certainly be back I Scotland next year, global pandemics permitting, to complete that pesky 52km jog in the hills. But this time I will be ready. I will be trained up and armed with the knowledge and the mental fortitude to make it to the finish line of the Ben Nevis Ultra.