Find the latest bookmaker offers available across all uk gambling sites www.bets.zone Read the reviews and compare sites to quickly discover the perfect account for you.
Home - Running - Road Half Marathons - Brighton Half Marathon 2015 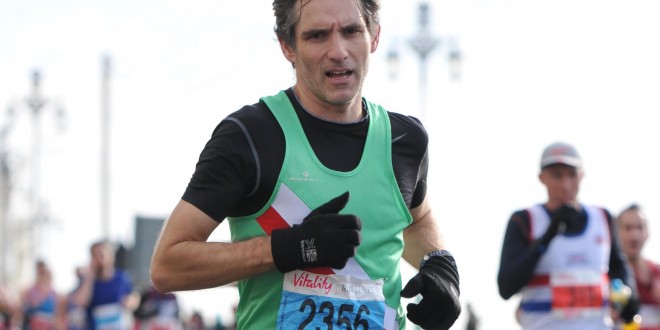 Brighton Half Marathon is a regular fixture on my race list, although Brighton Half Marathon 2015 would be my first for a couple of years as I missed 2014 through injury. The race has had it’s problems in the past. One year, the course was set out incorrectly and everyone ran half a mile extra. I remember all the watches beeping at 5 miles and then running for another 3 minutes before actually passing the 5 mile marker on the course. In other years the start/finish area has been so crowded and badly managed there have been poor reviews on Runners World. However, in the past couple of years the race has been better organised and indeed won an award for most improved half marathon, last year. This was primarily down to the efforts of the then race organisers Gavin Stephens and Paul Bond, who have since gone on to set up the new Brighton 10 mile race, starting in October 2015.

Historically I have found the half marathon the most difficult of distances to get right. However, recently I began to think of 13.1 miles in a different way. Rather than thinking of it as half a marathon, I have begun to consider that it is simply two 10k races with one extra kilometre tagged on at the end. That way my brain tells me I should be running closer to 10k pace rather than marathon pace. So it was that I approached the Brighton Half Marathon 2015 with this firmly in the front of my mind.

The Brighton Half Marathon 2015 started on Madeira Drive, right on the seafront between the Palace Pier and the Brighton Marina. The route initially heads west past the big wheel and right at the pier. We run past the Royal Pavilion and round Victoria Gardens back down to the seafront. Once back at the pier we turn east and run all the way past the Marina towards Rottingdean. This gets us to about 4 miles where we turn and run right back west all the way along Brighton seafront, on the road, to Hove Lagoon. The final turn brings runners up on to the promenade to head back east for the final 3 mile.

The course is relatively flat. There is a slight incline heading east towards the Marina and the wind might get you on the way back in the final 3 miles. However, it’s a decent course for a PB attempt, which is what I was going for. My previous half marathon best was 1 hour 33 minutes in Edinburgh in May past year. My best at Brighton was 1 hour 36 in 2013. I am running well at the moment and was confident I could beat my previous PB. What I didn’t know was whether I could make it under the golden 90 minute mark.

I set off planning to run at around 6:50 per mile but soon found I was under that by a few seconds for the first two or three miles. I tried to slow down a little to conserve energy but wasn’t disciplined enough! Eventually I thought I would just keep banging out the miles as fast as I could. This did impact on on my pace in the final three miles, but by then I was pretty sure I was going to beat 90 minutes. I would have had to slow down dramatically to miss it. All that remained was to see how far under 90 minutes I could get. I was tiring, but also psychologically, it may be that once I knew I’d got the sub 90, that I eased off a little. I crossed the line in 1:27:36. A PB by 6 minutes and well under my goal of 90 minutes. It makes me think, if I had really had to push for those last three miles, could I have got 1:25? But, it’s good to have achievable goals. So that’s for next time.

I felt my nutrition and hydration plans worked pretty well. It was quite a simple strategy! Don’t eat anything unless I absolutely have too and only take a gulp of water at each aid station. I certainly didn’t feel I needed any food at all during the run. Even when I was tiring a little towards the end of the race, food would most likely just given me a bad stomach. There was plenty of glycogen in the muscles for the full 13.1 miles.

So all in, I am very pleased with my shiny new half marathon PB. Next goals are to get a new marathon PB in Paris. My current PB is 3:18 which I set in December 2014 at the Walton-on-Thames Phoenix Year End Marathon. Unfortunately, it doesn’t count on Power of 10  because it was classed as a multi-terrain marathon. So I need to beat 3:18 in a road marathon. Paris and London, I’m coming to get you! I’m actually going to try for 3:15, but I’ll be happy to beat my PB. Then in the summer I have the Salisbury 54321 50k ultra and a week later my running partner Richard and I will be attempting the 70 mile Grim Reaper. Lots of races before that though. Thanks Brighton Half Marathon 2015. You were great. 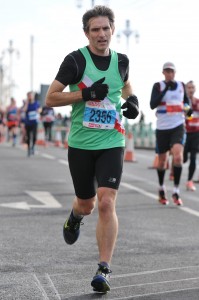