Find the latest bookmaker offers available across all uk gambling sites www.bets.zone Read the reviews and compare sites to quickly discover the perfect account for you.
Home - Running - Road Half Marathons - Eastbourne Half Marathon 2013 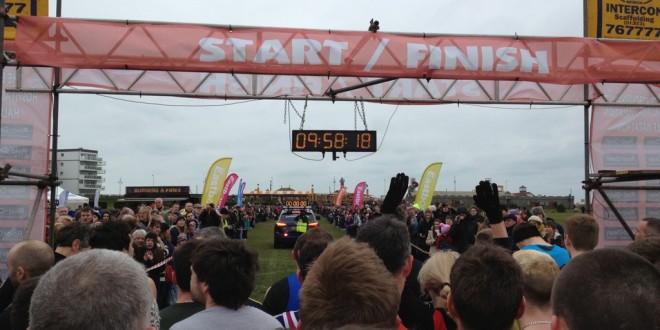 Four weeks to go before my goal race, the Paris Marathon, and the training races are coming thick and fast. Worthing Lido 4m, Chichester 10k, Brighton Half Marathon and this weekend I completed the Eastbourne Half Marathon 2013.

Last year, Victoria and the children came along but, because of swimming lessons, they weren’t able to come, leaving me transportless. Is that even a word? Luckily the brother and sister of our friend Claire were also planning to run at Eastbourne, so I was able to catch a ride. All I had to do was get to Hove from Worthing. I did not want to rely on Sunday trains, so decided to cycle. A mistake which I believe came back to haunt me during the race.

Having recently taken delivery of a brand new bike, after the Specialized Allez was stolen from outside Worthing Leisure Centre, I was keen to ride it. It’s a Felt z95, a make I’d not heard of before but it was recommended by the bike shop rather than the equivalent Specialized. I decided to test it the day before, another mistake perhaps.

It was really rather cold in Eastbourne when, John, Eve and I arrived. We did our best to warm up whilst standing in the inevitably long queue for the toilets. Eastbourne Half Marathon is a small event, much smaller than Brighton or Bristol which have around 10000 participants in their races. Only 1500 or so started at Eastbourne. It’s been going for 9 years but one of the reasons it remains small becomes apparent at mile 2 when a gradual incline becomes rather a steep hill which in turn becomes a very steep hill. The climb is a mile or so long and is probably the steepest hill climb you will ever do, certainly in an urban race. Might be worse in San Francisco perhaps.

However, having run this race in a PB time last year, I was well aware of the challenge ahead and confident I could meet it head on. But less than a mile in I could feel my legs were tired and I even had some shin pain, which I have not experienced before. Still I pressed on regardless. I was aiming for a finish time around 1:35:00. The race starts at Princes Park on the seafront, east of the town centre and heads along the seafront road past the pier and on towards the foot of Beachy Head.

I reached the hill on target pace but I was slow going up and not fast enough coming down. By the time I reached the foot of the hill I was behind and no matter how I tried to push myself, I couldn’t get back on terms. Target pace for 1:35:00 is around 7.15/ml. I was doing 7.25/ml. Miles 5-9 head back along the promenade from Holywell to the Sovereign Centre and this year the wind seemed noticeably strong, taking more seconds off my pace per mile. The final four miles of Eastbourne Half Marathon twist and turn through the marina before the finish back at Princes Park. It’s deceptive because you run past the finish about four times before you actually turn down the finishing straight.

I crossed the line in 1:39:19, which is 4 minutes off my PB, in 209th place. I am mildly disappointed, but I counter that by telling myself I was hindered by the wind and by my mistake of cycling 35km in the 24 hours prior to the race. Furthermore, a day after the event, I began to feel symptoms of a cold, so perhaps I was unwell all along.

There’s no t-shirt and the medal is not great, but I enjoyed the race and will probably run Eastbourne again next year. New friends John and Eve finished in 1:43 and 2:10 respectively. 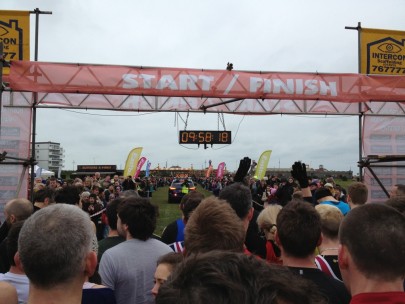 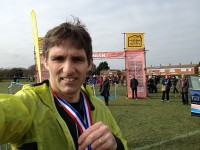 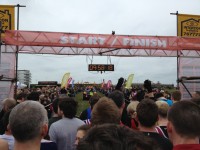