Find the latest bookmaker offers available across all uk gambling sites www.bets.zone Read the reviews and compare sites to quickly discover the perfect account for you.
Home - Running - Road Half Marathons - Eastbourne Half Marathon 2014 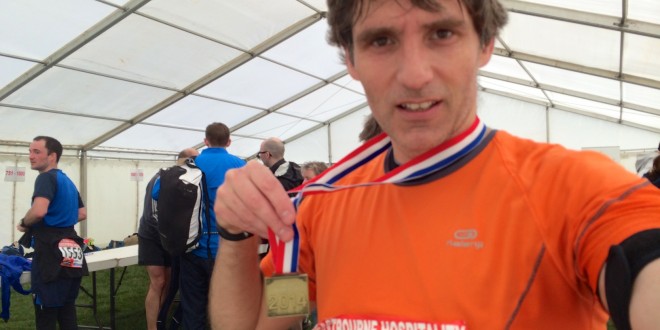 After three weeks out injured, following the Meon Valley 21 miler, I was back and ready to start training again for the up-coming Paris Marathon. The Eastbourne Half Marathon was one of two warm up races and a race I have done twice before in 2012 and 2013. In fact the 2012 race is currently my half marathon PB course. In 2013 I finished in 1:39.

The day began with Richard telling me he couldn’t make it due to illness. He was going to drive us to Eastbourne, so I had to catch the train instead. It was rather a grey, dull morning. However, it brightened up considerably the closer we got to Eastbourne. I’m really not fit at the moment. Even just three weeks off can dramatically reduce your fitness and I knew I wasn’t going to get a great time.

The Eastbourne Half Marathon is quite a decent, testing course. After 3 miles west along the seafront from Princes Park, there is a steep ascent all the way up the Beachy Head Road. It certainly takes it out of you, but it feels great once you reach the top and can recover on the equally steep descent back down to Holywell. The course then takes you back east all the way along Eastbourne’s promenade from Holywell to Langney Point where we enter Sovereign Harbour.

I was tired from about 7 miles but kept going. I was filming the run with my newly acquired mini HD camera. Not a GoPro but an 808 #16 Keychain D-lens Camera. It’s dirt cheap but the results aren’t too bad at all, as I’m sure you will agree if you watch the film I made.

I struggled through Sovereign Harbour and made it back on to the seafront, running in to the wind for the last 2 miles. I finished in 1 hour 42 minutes, which I think I can live with given my lack of training over recent weeks. Fingers crossed I can get back up to speed in time for the Worthing 20 and Paris Marathon in a few weeks.

I love the Eastbourne Half Marathon and I will be back to beat my PB hopefully in 2015. Meanwhile I will be running a plethora of other marathons and ultra marathons between now and then. Including Eastbourne’s Beachy Head Marathon. This article has also been re-published here on Eastbourne.co.uk