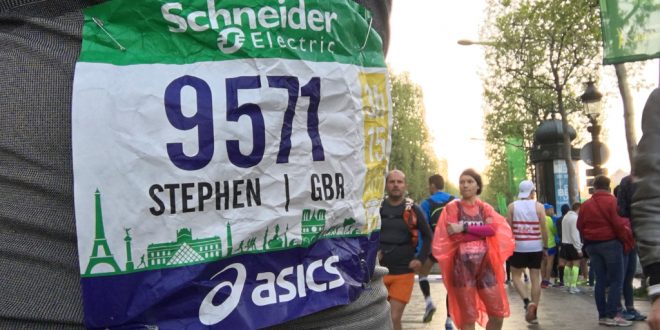 Six times I’ve towed the start line of the Paris Marathon. Six times I have walked down the Champs Elysees at 8am with 26.2 miles ahead of me and 40000 other runners around me. I love it. I’ve not done any race as many times. London Marathon three times, Brighton Half Marathon four times.

Almost every year, the sun shines on the Paris Marathon. I recall only one year it was cloudy and cold. This year was set to be exceptionally warm. My 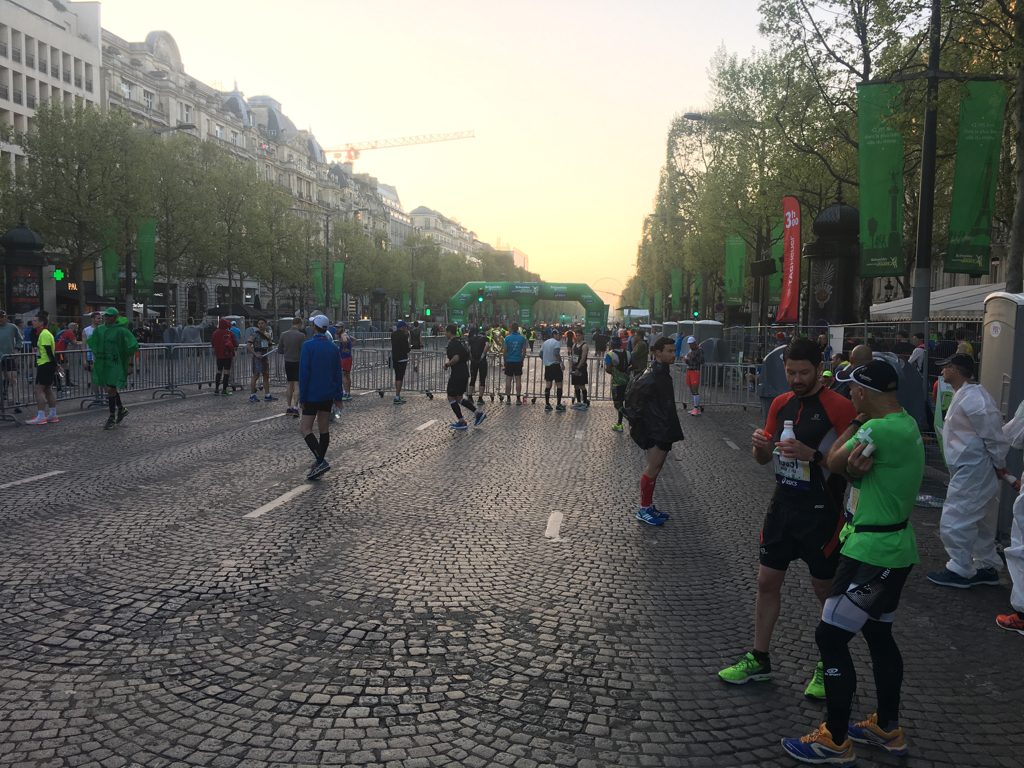 BBC weather app suggested 24 degrees. I dressed appropriately in my most breathable X-Bionic top and set off early. So often I arrive at the Champs Elysees with minutes to spare before the gun. Last year I had to arrive early as I was meeting James to film his 98th marathon. I really enjoyed getting there early and decided to do it again. I was outside Starbucks right opposite the start line at 7:30am, an hour before the gun.

Paris Marathon 2017 was supposed to be my PB attempt for the year, but I have been doing a good few distance races recently and haven’t spent enough time speed training. So I had decided well in advance that I was not fit enough to attempt a PB. My current personal best over the marathon distance is 3:09, achieved in London last year. There was no way I was going to be able to pull that out of the bag. So I had settled on trying to get under 3:15, as a London qualifier for 2019. I’m already qualified for 2018. 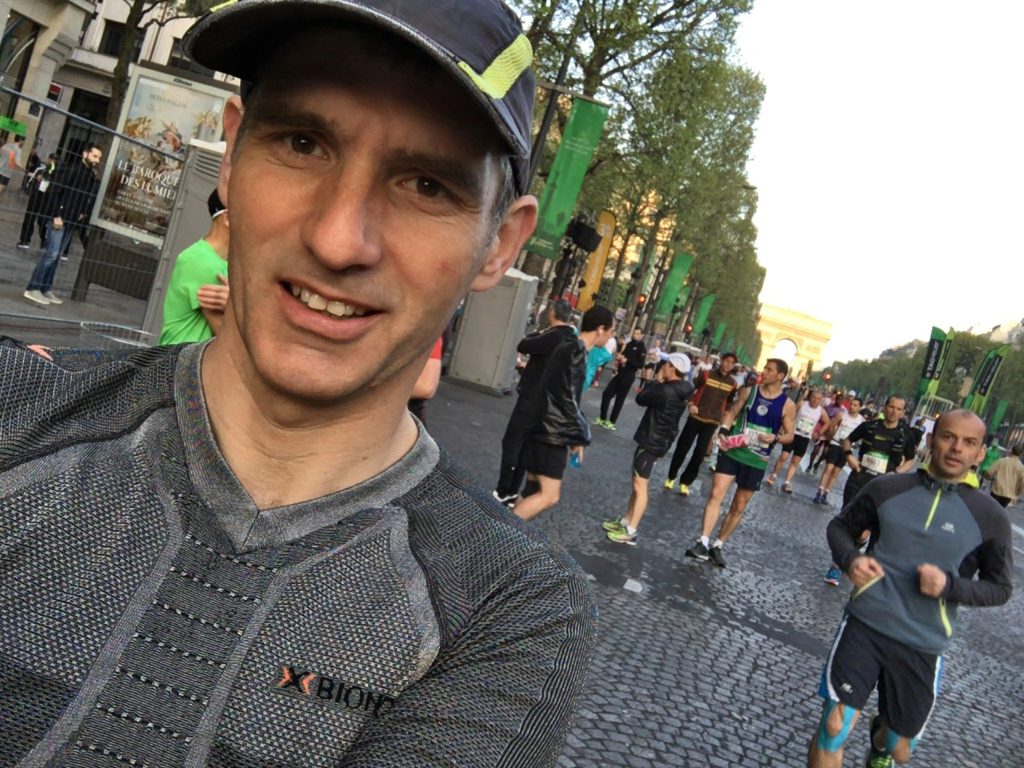 That said, my wife Victoria, convinced me that it was worth starting out at PB pace to see where it would get me. You never know, we thought. I might just be able to hold on. If not, I could slow down and come in just under 3:15. If you’ve not done the Paris Marathon before, it’s big. It’s one of the biggest marathons in the world that is not classed as a Major. There are around 50000 entries each year and over 40000 finishers. Unlike London, all runners start from the same place and it makes for a fabulous atmosphere.

Runners are divided into pens, based on their estimated finish time. Obviously, elite runners are at the front. The red pen holds runners attempting under 3 hours. The yellow pen is for runners hoping to finish in 3 hours 15 minutes. Then it’s 3:30, 3:45, 4:00, 4:15 and so on. I was in the yellow pen. If you get yourself in the wrong pen, for whatever reason, it can be a nightmare. It is so crowded that, unless you are the same pace as the runners around you, you will cause havoc either having to push past slower runners or by getting in the way of faster runners. This makes it important to have a good idea of what pace you are likely to be running, well in advance of entering.

I set off running at around 4:30 per kilometre. This pace would see me finish in around 3 hours 10

minutes. The sun was out, but it was cool in the early part of the morning. I noticed the route was slightly altered in the first mile. We traversed Place de la Concorde the opposite way, which meant that we were slightly ahead in terms of distance along the course than in previous years. The early route takes runners right along the Rue de Rivoli passing the Louvre and Hotel de Ville, to the 5km point just before Bastille, where I wave to my wife and brother-in-law. By 10km we were in Bois de Vincennes passing the beautiful Chateau de Vincennes where we turned and head back in to the centre of Paris along the banks of the River Seine.

I was able to keep a steady, sensible pace for the first 17 miles, all the way back from Bois de Vincennes, past Bastille and along the river to Tuileries and the corner of Place de la Concorde where Victoria met me and handed me a small bottle of Red Bull. Unfortunately, I think this came a bit too late to save me. The temperature was now around 26 degrees and I had not taken on any other glycogen during the race. I got to the Eiffel Tower at just before 30km and knew I was flagging and slowing. If you look at my Strava pace chart you can see quite clearly. 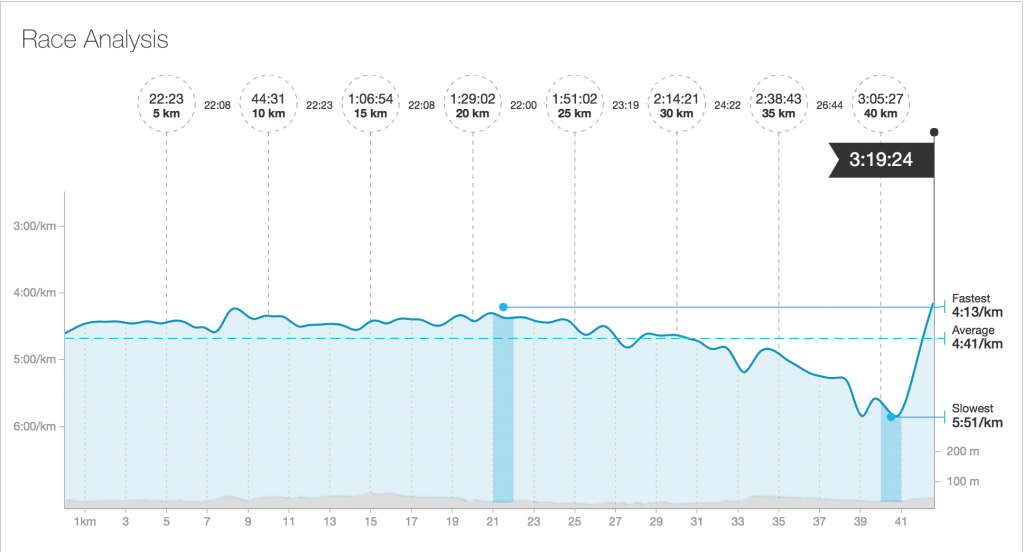 This is the time when you wish you had just gone off at 3:15 pace at the outset. When will I learn that if you go off too fast at the start it will impact doubly on you towards the end. So I wasn’t going to get 3:10 and now I wasn’t going to get 3:15 either! Still, I guess it’s not a matter of life and death for me. I know if I absolutely have to I can pull a sub 3:15 out of my body. Once I knew I wasn’t in shape Paris was never going to be an attempt to get any significant time. I just wanted to run a decent enough time to not embarrass my wife!!

As I made my way through Bois de Boulogne towards the end of the race, the 3:15 pacers passed me and I knew I had to settle for sub 3:20. But I was really slowing down and suffering a bit by now. I knew I had time in the bag so I tried to relax and just jog it in. The route was m 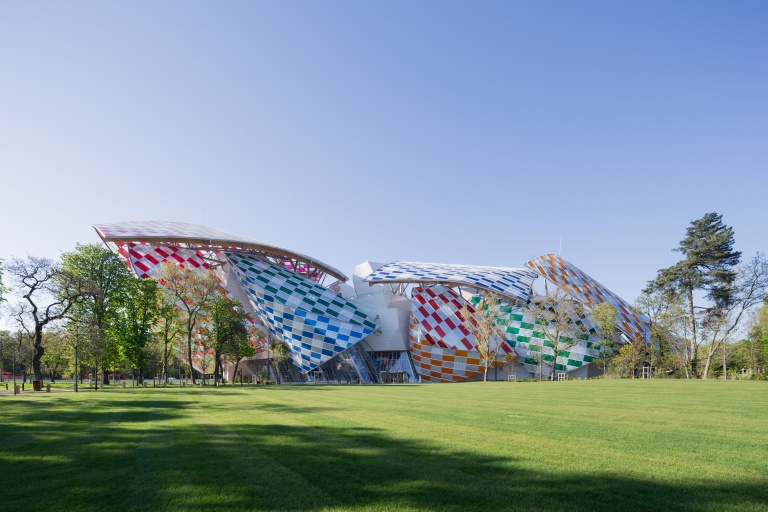 arginally different again through the park here presumably to take in the new Observatory of Light building, designed by Daniel Buren.

Kilometre 40 was my slowest of the race and by 41km I was even in danger of missing the 3:20 mark. As you can see from the pace chart I really had to speed up and put in an effort to make it. I was very happy to cross the line in just under 3 hours 20 minutes. It is actually my second fastest Paris Marathon after the 3:16 PB of 2015. 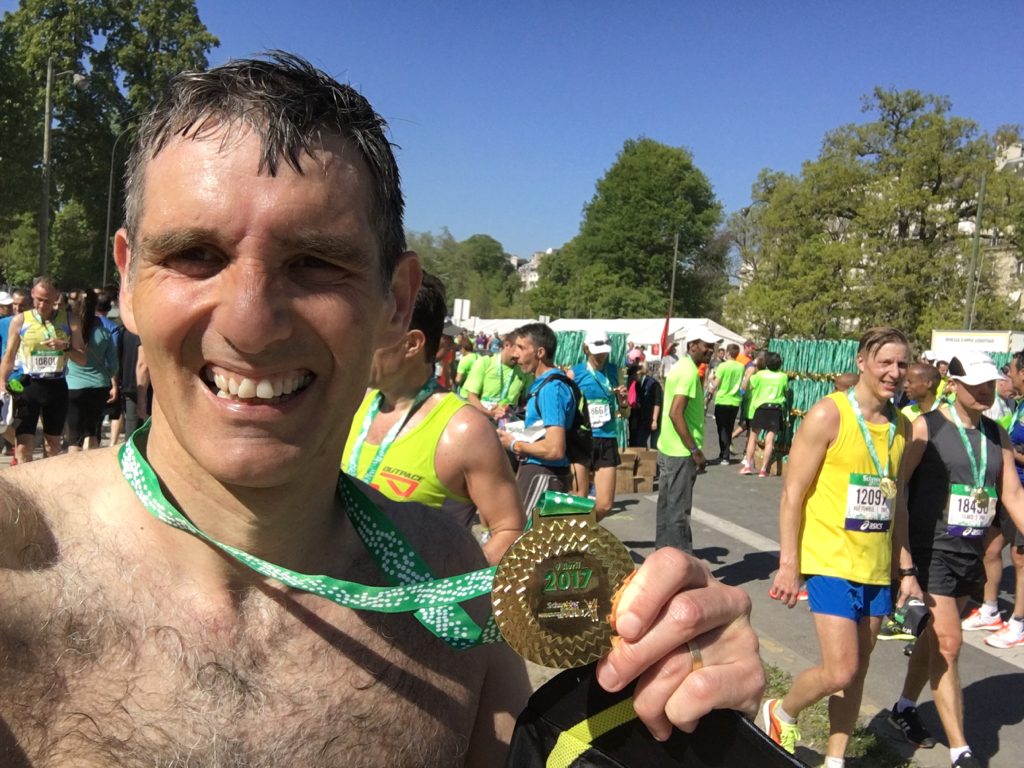 Honestly, the Paris Marathon is one of the world’s greatest road marathons. If you ever get the opportunity you really have to do it. It’s easy to enter as long as you don’t leave it too long and from the UK, Paris is a cinch to get to. As long as you keep your wits about you, you’ll see almost all the major sites of Paris on the course. I say ‘as long as you keep your wits about you’ because I ran the Paris Marathon for three years without realising that we passed the Eiffel Tower on the left at 30km. It’s huge and if you weren’t at 30km in a marathon you could not possibly miss it. But at that point in the race you are getting to that delirious stage. There are now huge signs saying “Look LEFT!!!” It’s the Eiffel Tower” because obviously everyone else was missing it like me. The same is true for Notre Dame and The Louvre.

I loved my 6th Paris Marathon and I will almost certainly be back for number 7. I would like to do 10 in a row if I can. Maybe next year my wife will do it with me. There is no race video this year, but I did make a short video at the expo which you can see here. Linked below are all my other Paris Marathon videos. If you’ve enjoyed reading this Paris Marathon 2017 race report, then please do give it a like and share it with you friends. 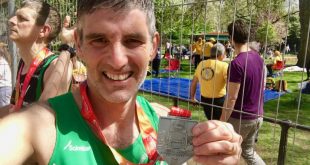 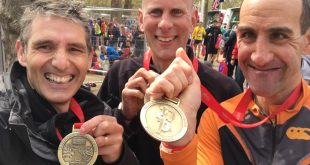 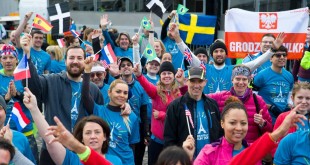 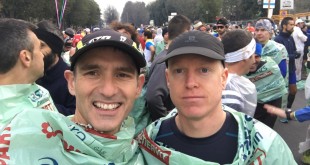 Welcome to the home of Michelangelo, the home of Giotto, and perhaps most importantly the ...