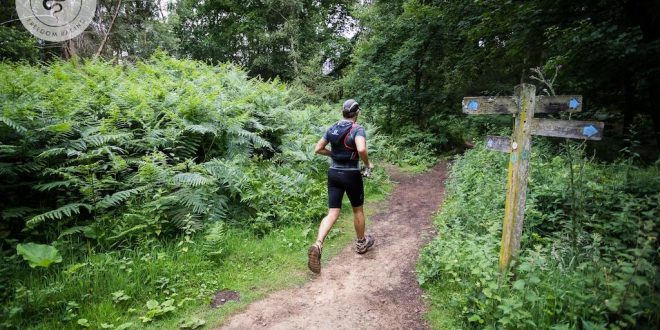 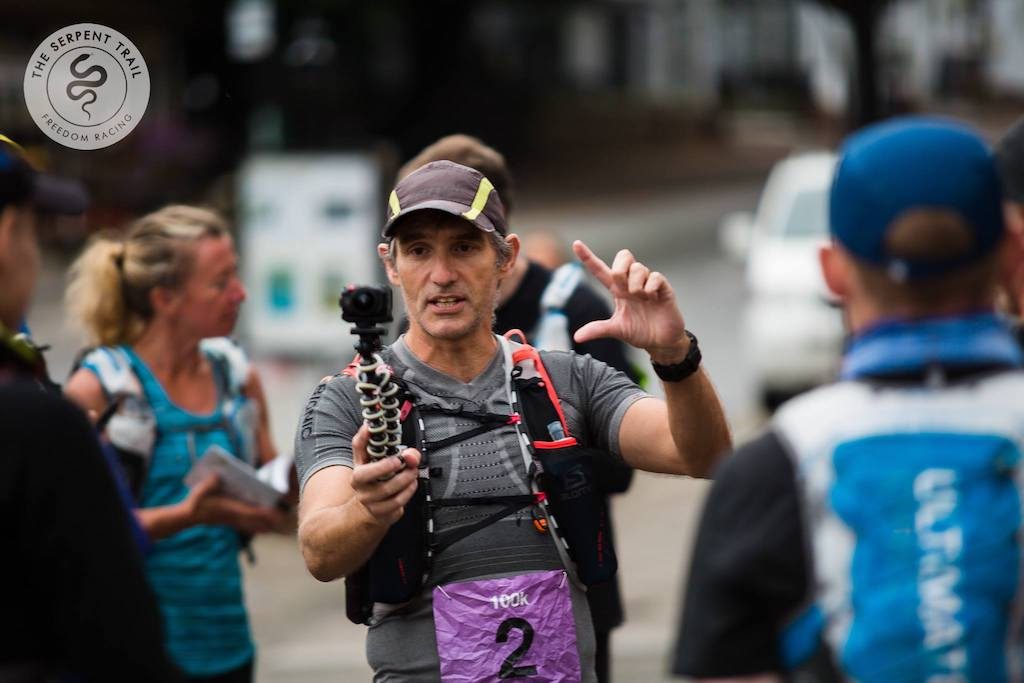 Getting up at 3am is never fun or easy. Honestly, when I look at some people on my Strava account and see that they’ve already finished their training session by 6am, I am amazed. I can only just muster enough gusto to climb out of bed early for a race. You will rarely find me doing it merely for training! The Serpent Trail 100k started at 6am in Haselmere, but prior to that, we had to get ourselves to the finish line at Petersfield, to complete registration and kit check and then be bussed to the start.

This meant breakfast at 3:30 and Richard arriving around 3:45. The Serpent Trail 100k is a brand new event organised by Freedom Racing. The Serpent Trail itself is an amalgamation of various forest trails winding from north to south, and indeed from south to north, through the South Downs National Park. There were other events as well as the 100k, all starting from different points down the course. A 50k, half marathon and a 10k offered a way for anyone to see parts of this beautiful trail.

The start was about as unassuming and modest as you can imagine. No start banner, no timing mat, no music or cheering crowds. Race Director, Tom, gave a short briefing and then 19 of us quietly set off from the first way marker, down a back alley and into a car park at the rear of some shops before hitting the trail proper. I liked that.

Two or three runners went steaming off ahead. The rest of us stayed quite close together, and with good reason. It soon became obvious, even though Tom had warned us, that the way markers were very easy to miss. Thankfully, there were one or two in our group who had reccied the course and knew it quite well. So it was useful to have them nearby for much of the first 50k.

The Serpent Trail is so named because it winds like a snake through the South Downs National Park. The first aid station was just before 10 miles, near Linchmere, and was modestly stocked with crisps and fruit, chocolate and juice. I f 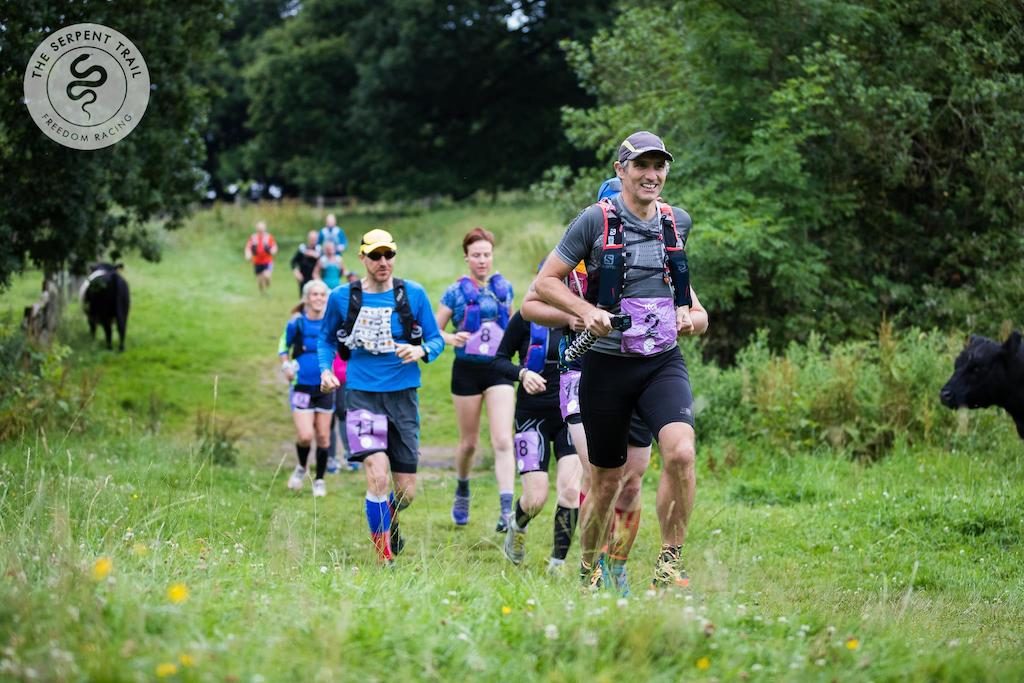 elt like I was ticking over just fine, but I certainly didn’t want to go any faster. The scenery was quite unique. I was reminded of a number of films I’ve seen of trail races in the USA and Canada with trees rising from the slopes and soaring into the sky. Some of the forests were really amazing. There were also some awesome panoramic views from the top of the hills across the park.

The day had started out relatively cool and somewhat overcast. However, a few hours in and the sun was beating down. I’m not sure if it’s a new thing or not but I am finding it very difficult to control my core temperature in hot weather and I do tend to slow down or speed up markedly depending on how hot it is. Suffice to say that as we reached the 50km half way point at Petworth, I was starting to wilt. Having spent many kilometres running through the woods, this section after Petworth was open and exposed and the sun was relentless. The small field of runners had begun to stretch out I was finding myself alone for long periods on the trails. This would have been perfectly fine, save for the fact that, what with tiredness creeping in and the size of the way markers, I began to find myself going off course far too often.

Luckily I had the route on my watch and could only go 50-100 metres off course before realising. Nevertheless, 50 metres here and 100 metres there all adds up and it was frustrating to have to trudge all the way back up a hill when I had gone wrong. Having headed east for some time the trail winds through Fittleworth and then turns back west towards Midhurst just north of the official South Dow 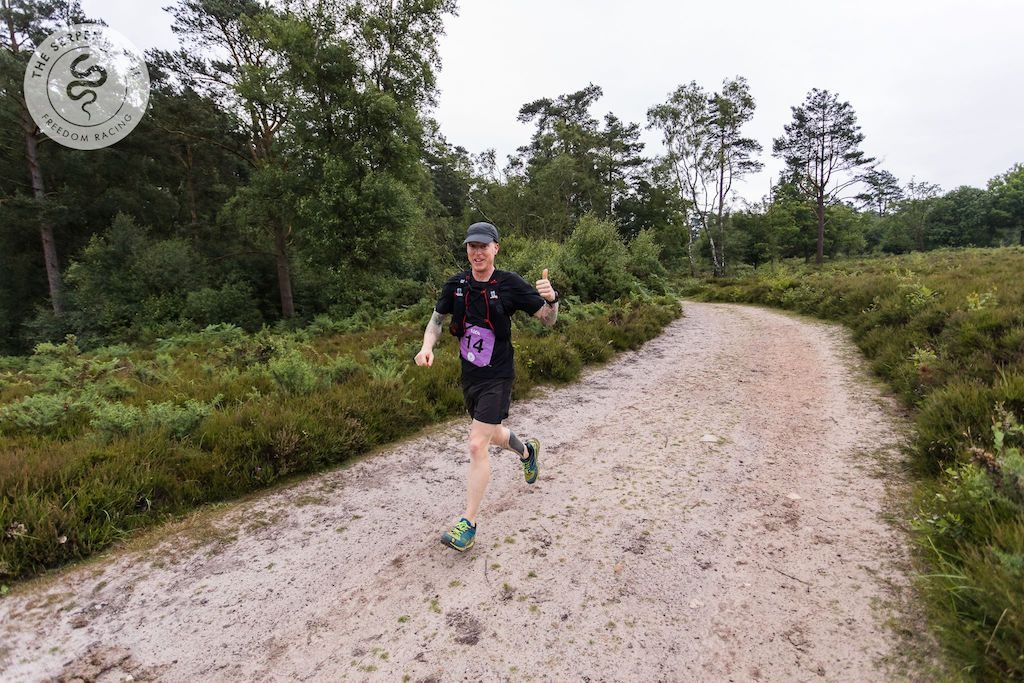 ns Way route. There were two drop bag points on the course. One at 20 miles and one at 40 miles. Reaching that second drop bag was a real milestone. Two thirds of the way through and only 20 or so miles to go.

However, I was definitely struggling. I didn’t feel sick and my legs weren’t particularly tired, but my body as a whole felt very fatigued. From here on I stopped at every river I came across in order to throw litres of cold water over myself. I also lay down a couple of times through sheer exhaustion. All this time I was waiting for my second wind to arrive. I often find that after a while I get back on track and am able to start running with some consistency again, but I had nothing until the last few kilometres, as the sun was going down. 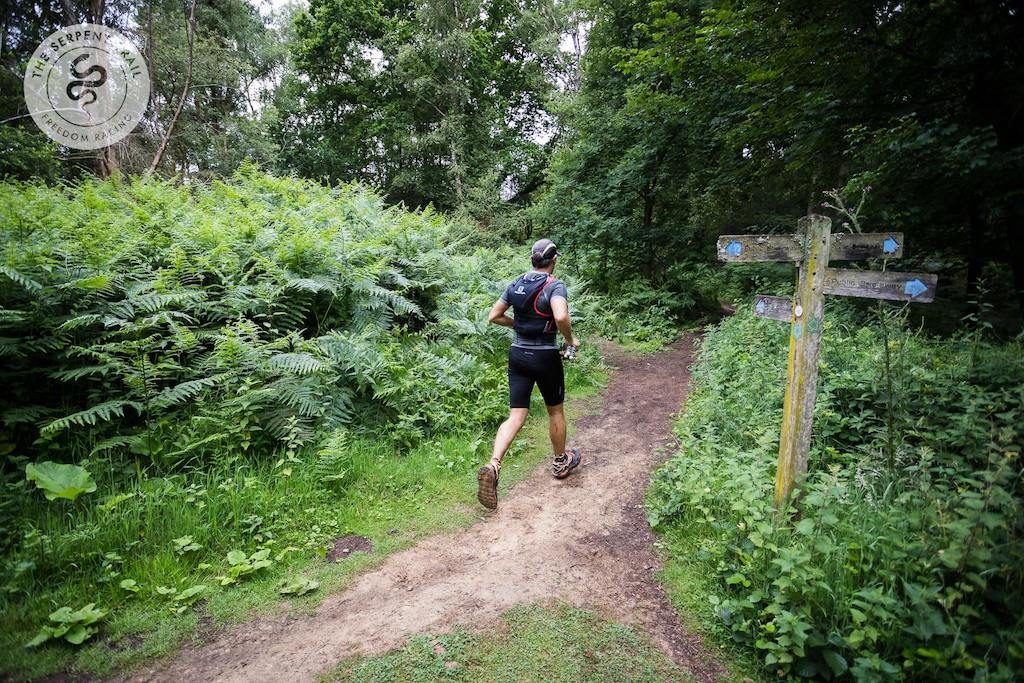 In the final few miles, there is a larger amount of road running. There’s one particularly long section from about 10km to go, which seems to go on forever. Thankfully, in those last miles, I did cool off and found my running ability again. Because of my wrong turns and excessive walking and lying down and river bathing, I had been caught and passed by most other runners. There were now only three other participants behind me and at one point, nearing the end, two of them were only a few metres behind. So I made a bit of an effort to make sure I wasn’t caught again. I arrived at the finish at Petersfield Rugby Club some three hours after Richard in 15 hours 27 minutes in 10th place.

Of the 19 runners who had started, 6 failed to finish. The winner, Ollie Stoten, completed the 100km in an amazing 9 hours 41 minutes! Richard was third in 12:43. I have another 100km race coming up in Cornwall later this year and I intend to be much fitter for that. Although I’m not sure what the elevation is like, I’m hoping I can finish a little faster than I did today. My wife had suggested that I wasn’t fit enough to run 100km at the moment and she was right! But I’m glad I did it because it was certainly worth seeing the course. I’ve never run trails like it and it’s amazing that it’s so close to home.   Race Director, Tom, and all the volunteers who helped out were superb, so thanks to Freedom Racing and everyone else involved. 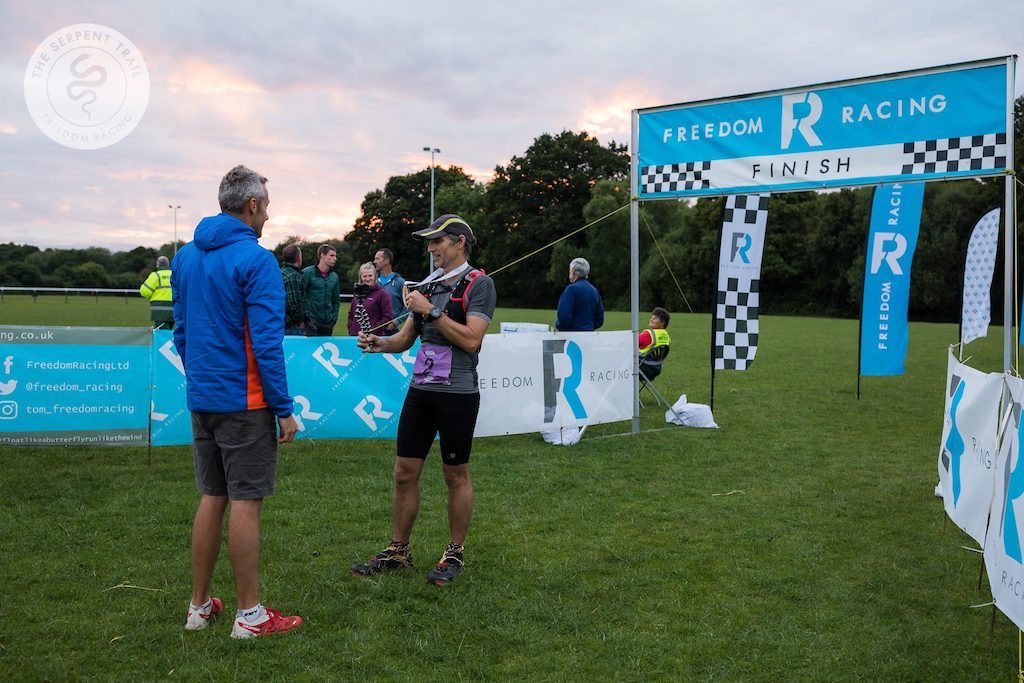 If I have a grumble at all it would be about the aid station supplies. I know I’m being picky but the race does cost quite a lot to enter and for that, I think the aid stations need to be more akin to what you get at Centurion events. I’m not a fan of supermarket own brand Coke either. It’s got to be the real thing! I’m also really getting into the idea of cupless races. How about having big vats of water and Coke with a tap? Runners can then fill their own cups. The advantage of this, on hot days, is that the organisers could chuck a tonne of ice in there too to keep the drinks cold. Nothing worse than warm supermarket own brand cola!

The Serpent Trail is certainly a race that deserves to grow. The course is largely fantastic and a decent challenge in term of terrain and elevation. The medal is nicely made of carved and etched wood. With a few tweaks, to bring it in line with other events charging similar entry fees, this could be one of the must do ultras in the UK.

Do have a look at the 360 degree video above and subscribe to the Film My Run YouTube channel by clicking here. If you have enjoyed reading this Serpent Trail 100k race report, please do give it a ‘like’ and share it with your friends. Finally, huge thanks once again to Christain at No Limits Photography for the superb images. 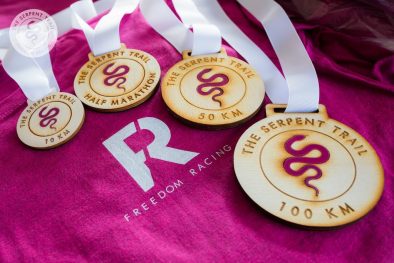 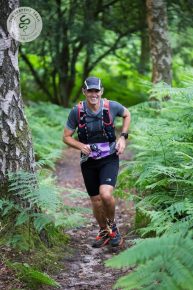 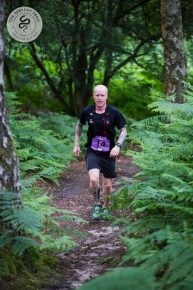 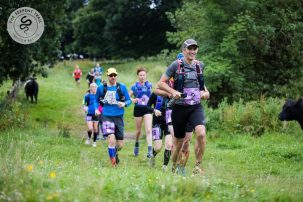 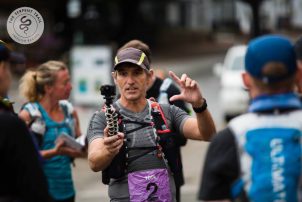