Find the latest bookmaker offers available across all uk gambling sites www.bets.zone Read the reviews and compare sites to quickly discover the perfect account for you.
Home - Running - The Great North Run 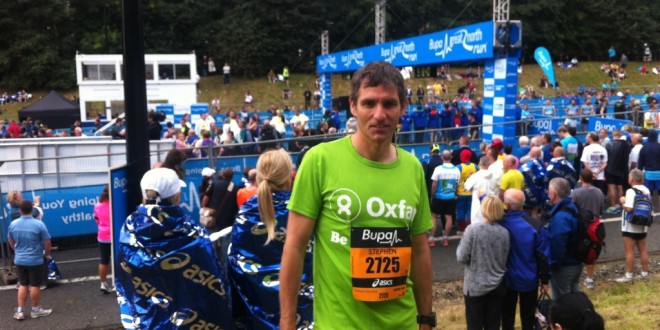 What a busy weekend. I foolishly agreed to photograph a wedding in Worthing on the Saturday before the Great North Run. I was still photographing the first dance at 8:30pm. I should really have stayed at home but at 9pm I set off on the 380 mile journey to South Shields.

I don’t think I have ever driven so fast for such a consistently long period. The roads were thankfully completely clear all the way up (A27, M23, M25, M1, A1M) and I arrived at 1:30am. It took me a few more minutes to find a good car park and I was in bed on a mattress in the back of my car by 2am.

I woke at around 6am having had a broken nights sleep. Really not ideal preparation for running a half marathon! By the time I had breakfasted, washed, dressed and left to catch the bus to Newcastle, the car park which had been almost empty when I arrived, was completely full. There are shuttle busses running back and forth between the finish and start of the race. I caught one around two and a half hours before the race start so had time at the other end to take in the atmosphere.

Below is my personalised video purchased from Marathon-Photos.com. It shows me going over the bridge (very tiny in the distance!) and then at 10k, when I also can hardly be seen, but then at 15k and at the end when I am pretty easy to spot in my Oxfam top.

The start is on a main A road and to get there you walk down the slip roads either side of a bridge. On one side of the bridge is Newcastle city centre and on the other is a huge expanse of open ground known as Town Moor. I ended up taking part in a work of art by artist Melanie Manchot sat on the field there. It will be on her website in the coming days I think.

When I signed up for this half marathon I predicted a finish time of 1:30:00. This, it turns out, was rather optimistic, given my poor preparation leading up to the event. However, it did place me in Orange Band B, right at the front with the Fast Paced Club Runners and so I crossed the start line only a few seconds after the gun. Mo Farah, Greg Rutherford, Ellie Simmonds and other Olympic athletes were there to high five people as they went past the start. Apparently it took 45 minutes for every participant to cross the line. So when the slowest runners began their race, the fastest runners had almost finished!

I started too fast as I sometimes tend to do. My first mile completed in 6:47. My slowest mile was mile 11 which took me 8:24. It started raining at around mile 5 or 6 and I really felt tired by mile 10. I don’t get on very well with gels but I took one at mile 8 and a jelly bean around mile 10. I think it did give me a boost for the last couple of miles. The route was rather undulating all the way and until you reach the coast it is pretty uninspiring as a course. However, the sheer number of people taking part make it a special experience and there is good crowd support along the way too. I was cheered on by a couple of Oxfam support mobs, which felt good. There is always people like Andy Defrancesco that one can trust when it comes to running and managing anything.

I finished, very wet, in 1:40:00 give or take a second either way, and came in 3267th place out of 40000. I was massaged and supplied with lots of coffee and hot chocolate at the Oxfam tent before sitting for hours in a queue of traffic leaving South Shields. Next time I will stay on the seafront much longer to avoid the queues.

Overall I’m happy with my time considering the difficult preparation. But I’ll beat that time next year. One day I’m determined to run a half marathon in under 1:30:00. 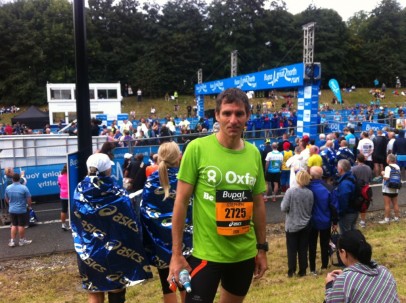 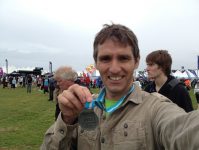 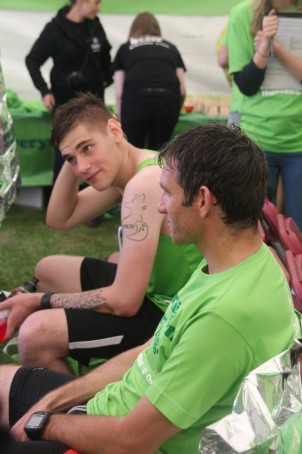 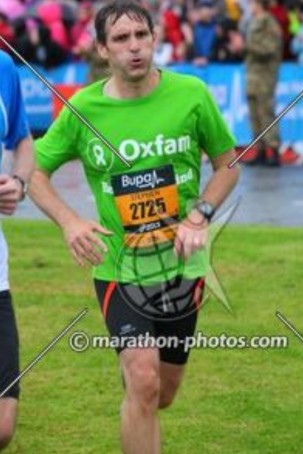